Short Bio – One Eyed Oracle is Boris Buhot (Be-U-Oh) a Toronto based, multi-instrumentalist, singer, songwriter with a powerful collage of alternative-grunge-folk styles, which migrate through themes of social awareness, inner truth, and outer change.

Full Bio – One Eyed Oracle is the artistic embodiment of Boris Rene Buhot, a Toronto born, singer-songwriter, multi-instrumentalist, recording artist who now calls Oshawa, Ontario his home. From an early age, seeing the ghostly imprint of a full grown bear, standing on it’s hind legs with both paws outstretched high over it’s head, to recently hearing the words “one eyed oracle,” spoken into his waking mind, he has always kept an open tuning for all naturally unexplained phenomena.
As a child, he witnessed a water dowser find a well for a neighbour who had already tried in vain, drilling a two hundred foot dry hole. Buhot had the opportunity to test the theory, and as he walked over the area that contained the underground stream, the branch (a forked shaped specific type of wood) lunged uncontrollably down toward the Earth, twisting in his palms. The pain from the friction would stick in his memory till his current realization that, “water plays a song and all life is tuned to its frequency.” 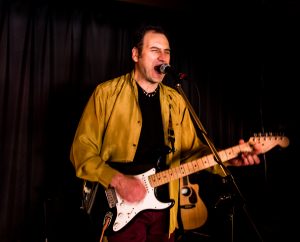 Buhot started taking piano lessons soon afterwards, and within a short period of time wrote the part to “Break Free.” CFNY was the first radio station to broadcast punk, and new wave in Toronto, and he would tape songs every Thursday night during their top 30 countdowns, and learn the songs on bass. This thirst for new music lead him to places like Nuts’n’Bolts, and The Domino Club, where he was exposed to carefree people “dancing with” themselves who did not fit into any of the stereotypes he had seen beforehand. That “primordial stew,” became a major imprint on his song-writing, and dancing with yourself is not only accepted behaviour today, but good for social isolation.

The Real Gary 17 says ONE EYED ORACLE “is a formidable tunesmith whose lyrics, like his somewhat heavy-mooded musical delivery, is direct, visceral and resonant. Alternating between the Grunge Folk vibe and what you might call “Stark Rock”, their songs punch through any film of complacency that might be obscuring your vision, presenting boldly and plainly the plight of the modern human.”

“love doesn’t just make the world go round, it holds it together” Boris Buhot

Hear or Own Really Small Town